What Our Customers Say About Our Roofing Services

The best roof installation, tear-off and roof repair services in the Monroe County, PA/Poconos area with over 60 years experience 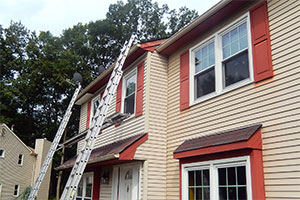 “We hired John Asch Roofing to repair and reshingle our roof on the recommendation of two friends who each had John re-roof for them. They were very pleased with the work and the price quoted. After two estimates (one as high as $44,000) and the second seeming to be a fairly reasonable quote, John came in with a price several thousand dollars less than the second quote. Not only did he beat the price, he and his workers re-roofed our house in one day and left a clean yard. The men who worked for John were courteous, diligent, and thorough. All in all, we are very satisfied.”

“While remodeling our family room we realized we needed some minor roof repair. I began having companies come in to give us quotes. The first company to come in was unprofessional, did not explain things clearly and came back with a price of $900.00 for a simple patch. Then John Asch Contacting came. Mr. Asch was very professional. He went over the exact work that had to be performed and came back with a quote that was MUCH less for the exact same repair. Needless to say, John Asch has made the repair. We chose him not only for his reasonable pricing but because he took the time to make sure the job was done properly.”

“Just wanted to thank you for your fast service. You replaced my shingle roof over 10 years ago. Due to the heavy wind storms I noticed a shingle had blown up. I called you on a Sunday and was surprised to receive your call back that day. Your man just left and fixed the repair under warranty. I would highly recommend your services.”

“When we had a roofing repair issue I was very unsure of which contractor to call. Based on recommendations and references, I called John Asch. One word: EXCELLENT. He returned calls promptly 100% of the time he called when he said he was going to, the repairs took place when scheduled, and he patiently answered all questions. John Asch company did not create any unnecessary work, and also inspected all aspects of the roof for any potential problems. When he discovered issues that were not in his expertise, he recommended other craftsman who could do the work. His rates were reasonable and the crews were efficient, courteous, and all repairs were accomplished. Even with all the additional demand created by Hurricane Irene he accomplished the task on-time as scheduled. I would definitely use his services again should the need arise, and would recommend him without reservation.”

“Your company installed a new roof for us on August 18, 2010. I was impressed at the time that it was completed swiftly and all the debris was cleaned. Your workers were very polite and as quiet as they could be. What most impresses me is your follow-up since the job was completed. I had a question about something I did not include in my contract and you called me back promptly and handled my situation respectfully and quickly. The I called after the hurricane (Irene), because I saw what I thought were a few shingles from my roof on my grass. Without hesitation you said someone would be there 3 days later ( this was no emergency) which was Labor Day and that AM you phoned to say he was on his way. Thankfully they were not my shingles, but nonetheless your employee checked the roof, easing my mind. Thank you! I would and have recommended your company to anyone and everyone.”

Thank you,
Fran and Arnie Lobl

“Thank you so much for helping me with my roof. After trying to patch it up twice with no luck, I still can't believe that you offered to redo the entire valley of the roof for free, even though my guarantee had expired already. Now, I know why my dad had trusted you to put on the original roof in the first place! You are truly a man who stands behind the quality of his workmanship! You and your crew were great--prompt, polite and courteous. They worked for six hours and they cleaned everything up, as if they were never there! My roof matches beautifully and it doesn't leak. You are the best John, and I will always call you if I need anything and I will recommend you to all of my friends.”

“John Asch finished our roof yesterday. He had put a new roof on our house when we moved in 20 years ago. At that time, we had one small problem, which he fixed immediately at no extra charge & we've had no problems since. So, we came back to him when it was time for a new roof. Partly because of weather, his crew didn't get started until a few weeks after he'd said they would, but once they got started, they finished in two days, were pleasant, polite, & cleaned up everything.The job was completed only two days later than the deadline John had specified. In our experience of working with contractors, that's pretty rare.”

Call today to learn more about what Asch Roofing Services can offer you, including roof installation, roof tear-off, roof repair, slate roof repair and skylight installation. Call to set up an appointment for a free Roofing estimate in the Monroe County, PA / Poconos region of Pennsylvannia.

Free Estimate for your roofing needs in PA

If you are having issues with your roof in the Poconos area of Pennsylvania, give us a call. With over 60 years experience, we will come out at no charge and let you know what it will take to resolve your issue.
Give us a call at (610) 681-7007.